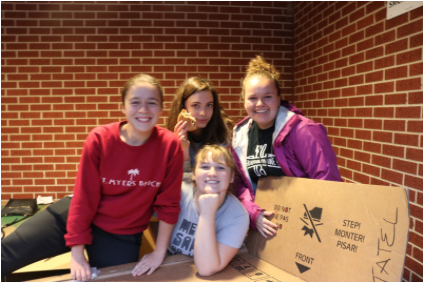 On October 4, 2018, 41 OLSH students and several teachers participated in the annual OLSH Box-Out. This event was to better understand the lives of the homeless. To achieve this goal, high schoolers underwent a night of sleeping in the cold air with nothing but a box and a sleeping bag or blanket. Such shelter is used for the homeless to keep themselves warm. “The Box Out was very empowering. I was able to experience what many people have to face everyday. It allowed me to feel grateful for what I have, knowing that many other people are less fortunate than we are.” says Lauren Zilner ‘20.

About six years ago, Sr. Mary Adrian Jumbelic told the school about raising money for the Felician Sisters’ homeless ministry in Kingstree, South Carolina. The school’s Campus Minister at the time, Erin Stuvek, went to organize the Box Out in order to raise donations. That year, about fifty students participated and slept in boxes within the school’s courtyard. This year, the event was held during the school’s week of acknowledging the Felician Sisters and the values the Order holds. One of the Core Values include Solidarity with the Poor, which made the Box-Out fitting. The night started with everyone making box houses. Some used duct tape to increase support; those with extra boxes were happy to give them away to other students. Afterwards, the students were gathered into one of the AAC classrooms and officially started the event with prayer. The night also consisted of arts and crafts, that is, making mats out of plastic bags for the homeless. When about an hour had passed, the students were sent to watch a movie about the lives of the homeless called Give Me Shelter. After munching on some food, the group went outside to their respective box quarters.

Though the thought of sleeping in an outside environment in a box with a lack of heat can be discouraging, many students considered the event not only fun, but very eye-opening. Sophia Blake ‘19 says, “The Box Out was so much more than just a night that you can spend with your friends. It was an opportunity to put yourself in somebody else’s shoes and live their reality for a night. I highly recommend participating in the event. It makes you look at your life differently and feel more grateful for what you have.” They were able to raise $2,200 to homeless shelters in Kingstree, South Carolina. Our cities, neighborhoods, and communities must remember the less fortunate. We are granted with so many blessings; we lose track of them. Everyday should be acknowledged as an opportunity to help those around you. Go out and do something good! Whether big or small, as long as it’s for the benefit of others, every act of kindness is something no one will ever forget.

For more information, go on over to Pittsburgh Post Gazette’s “Students in Moon ‘box out’ and Learn What It’s Like To He Homeless” article and video about the Box-Out. 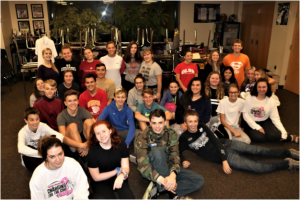